Microsoft, Apple, Amazon, Alphabet and Facebook — the five most valuable U.S. companies — lost a combined $162 billion on Monday, leading the broader market route, which was sparked by concerns of a trade war with China.

President Donald Trump announced last week that, as of Sept. 1, the U.S. would impose a 10% tariff on $300 billion of Chinese imports, signaling an inability for the world’s two largest economies to come to terms on a trade deal. Stocks had their worst weekly performance of the year, and continued plummeting on Monday after China allowed its currency, the yuan, to fall to its lowest level against the dollar in over a decade. 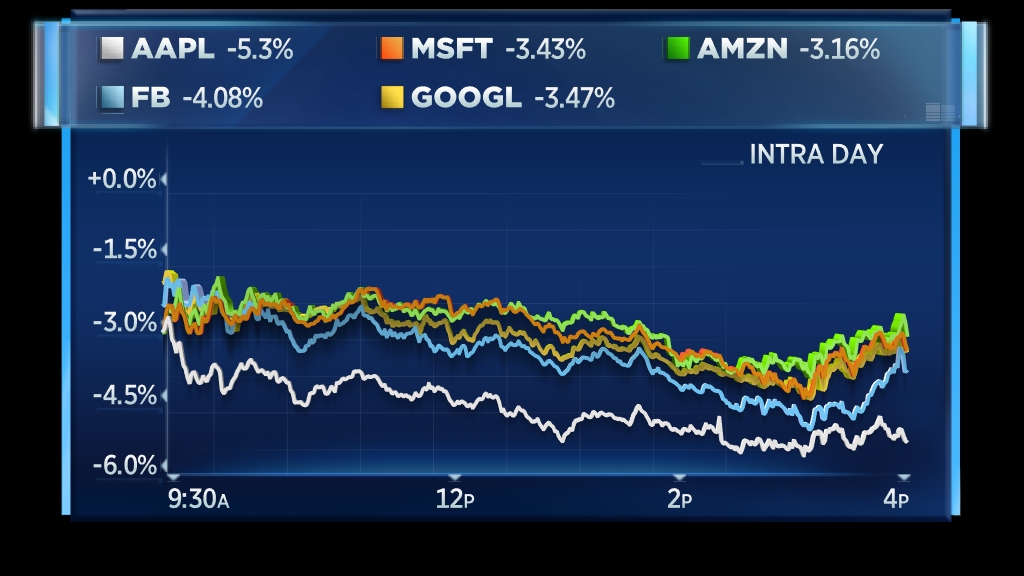 “Assuming smartphones, tablets, smart watches, and computer systems are not categorically excluded from the final $300B tranche, we expect there will be material impact to Apple hardware product earnings,” wrote analysts from Cowen, in a note to clients.

Apple has more exposure to China than its Big Tech counterparts because it’s so reliant on the country’s manufacturing plants for its top products, most notably the iPhone. Facebook, Google and Amazon have almost no presence in China. The other companies didn’t drop as much but still fell more than the S&P 500, a reflection of technology’s role in the economy — the industry typically outperforms in boom times and is disproportionately hurt during a slowdown.

Among Big Tech stocks, only Alphabet has underperformed the S&P 500 this year as the index rallied last month to a record. The benchmark is still up about 14% for the year. Alphabet is up close to 11%, while the others are each up at least 18%.

Ahead of the latest announced tariffs, Apple asked for waivers for the Mac Pro computer, and said it should be exempt on certain parts, including a power supply unit, the stainless-steel enclosure, finished mice and trackpads and circuit boards. In a tweet, President Trump refused the request, writing in a tweet on July 26, “Make them in USA, no Tariffs!”