An Ethereum holder recently carried out two transactions with enormous transaction fees. According to an earlier Decrypt report, the user paid $2.6 million in fees to send $130 of Ethereum. Just a few hours following this, the user was sending a bigger amount of money – $86,000 – but was still charged the same amount as transaction fees, another $2.6 million. Colin Platt, an independent consultant, told Decrypt that:

This could be the result of whatever is sending these txns (possibly an automated process) to incorrectly calculate the transaction fee (e.g., sending the Gwei amount instead of ETH).

Platt added that there is some speculation that the transactions came from an exchange, possibly a cold wallet. Pointing to the number of outgoing transactions from the wallet, he said:

You can see that it wouldn’t have been a hot wallet as the nonce was quite low.

Some crypto community members have argued that what happened could have been a money-laundering strategy. Theoretically, an Ethereum miner can turn illicitly-held crypto into “legitimate” miner income by paying a massive transaction fee and mining it themselves. This is possible as miners can choose what transactions they include in their own blocks and can keep the transactions to themselves.

However, this does not appear to be a case of money laundering because both transactions were sent to two different mining pools, which use thousands of miners around the world to find new blocks. This means that there was no single entity receiving the funds. They were likely to be spread around several miners.

After both the transactions, the funds were frozen and mining pools are still considering if the funds should be sent back to the original owner. Ethermine mining pool (owned by Bitfly) mined the second transaction. Bitfly tweeted: 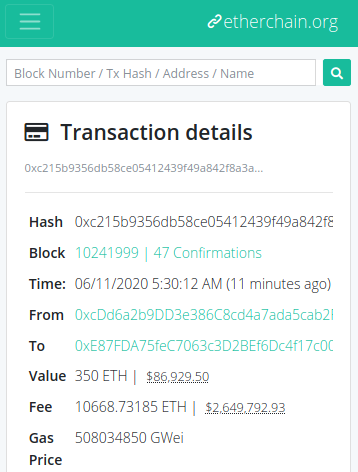 SparkPool, which mined the first transaction, had already tweeted that it had frozen the funds and was investigating the situation.